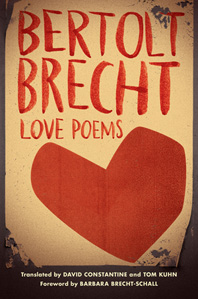 "A surprising cache of seventy-eight works nimbly translated by David Constantine and Tom Kuhn, with an introduction by Barbara Brecht-Schall… They span a range of forms and formality, from tightly written sonnets to jaunty doggerel, and a marvelous scale of voices, from the filthy to the forlorn. For many, they will be a revelation… Love Poems could even open the door to veneration." — Eric Banks, Bookforum

"The playwright responsible for 'The Threepenny Opera' and 'Mother Courage and Her Children' also wrote more than two thousand poems in the course of his career, many of which never made their way into English. The Oxford scholars David Constantine and Tom Kuhn have undertaken the translation of Brecht’s entire oeuvre, beginning with this volume of seventy-eight love poems, written between 1918 and 1955. The poems, which are composed in straightforward language and come in a variety of forms, from sonnet and ballad to lyric, are sometimes wistful and romantic ('When we had been apart longer than ever before / Fearfully I searched your letters through for such / Words unknown to me as would say you were / No longer the one I know so well and miss so much'), sometimes playful and dirty. Constantine and Kuhn write, in their introduction, that Brecht 'is known, very properly, for his engagement, as a writer, in the bitter and violent politics of his age, but he should also be known, quite as much as Goethe, as a poet driven by Eros." — The New Yorker

“The selection in Love Poems is a memorable and necessary reminder of the feeling artist in Brecht, the craftsman of humanistic, dynamic, erotic emotion….Their individualist and anarchic vibrancy do much to alter the diffuse perception of Brecht as an apparatchik with creaky polemical aims. What makes Brecht irresistible in Love Poems is how he ponders and prances as if some disaffected offspring of Petrarch and Catullus reared by the Earl of Rochester….[H]is best love poems match the provocations of his drama, prodding us from somatic complacency and the stultifying mundanity of our domestic lives.” — William Giraldi, The New Republic (Click to download review)

"What ... surprises is the tenderness he could convey. We would imagine that Brecht on the subject of love would be tough and cynical. Sometimes he is: the hard-bitten observer of human foibles is present and correct. But this book shows that there were many sides to him." — Alastair Mabbott, The Herald Scotland

"There is no denying that Brecht’s poems — which number more than 2,000 — have the same mesmeric power as do his plays​" — Nathaniel Nesmith, American Theatre

"This collection of Love Poems, the opening movement of the honourable mission to bring Brecht's poetic works into English, being undertaken by David Constantine and Tom Kuhn, is an achievement which feels worth celebrating." — Andrew McMillan, The Independent

"In this magesterial combination of minute detail and complete command of the social, political and aesthetic landscape that Brecht surveyed – from provincial Augsburg to cloudless Santa Monica, and above all to the "cold Chicago" of the asphalt city of Weimar Berlin and, later, East Berlin – the contradictions and complexities of the writer a foregrounded in a way that makes any simple gloss on his character unthinkable." – Eric Banks, Bookforum

“A magisterial biography of Brecht ... Parker’s choice to present new material very much through the prism of the artist is compelling ... Fascinating reading.” – Rebecca Morrison, The Independent

“We should be grateful to [Parker] for reminding us how important, love him or loathe him, Brecht was – and still is.” –  John Sutherland, The Sunday Times

“Stephen Parker’s Bertolt Brecht: A Literary Life is that rare thing, not only the biography of a genius, but itself a biography of genius. Parker, a Professor of German at Manchester, has written a foot perfect, detailed, fascinating and really inward book on a man who was plausibly described as ‘one of the most complicated human beings of the past fifty years’. It may well be the best literary biography I have read, the intricate demands of the subject met and unfussily answered by the insightful calm and nuanced decisiveness of the biographer . . . His is indeed one of the great literary lives, and Parker’s book is every bit as good as it needs to be” –  Michael Hofmann, The Times Literary Supplement

“[A] masterly biography of Brecht … [A]n astonishing tour de force based on impressive scholarship. For once the subtitle, ‘A Literary Life’, is apposite, for, as the complex strands of Brecht’s life are revealed, we never forget that he is above all a writer.” –  Donald Sassoon, Literary Review

“British scholar Stephen Parker’s new biography replaces the monster of Brecht & Co. with a recognizable human … Whatever percentage of those plays he wrote, Parker reminds us that it was Brecht whose ideas shaped their creation, Brecht who schemed and fought for their productions, Brecht who galvanized modern theater with a radically new performance style. He was deeply flawed man and an enormously important cultural figure. He fully merits the nuanced portrait he receives in Bertolt Brecht: A Literary Life.” – Wendy Smith, Washington Post

“Stephen Parker has written an extraordinary work about a man he also repeatedly finds extraordinary, giving his book unusual liveliness and spontaneity … [T]his is by far the fullest of any English-language source, and it is the fullest biography in any language, making good use of the magnificent chronology of Brecht’s life of over 1,300 pages by Werner Hecht.” –  Nicholas Jacobs, Camden New Journal